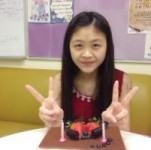 Friday is always a say-goodbye day. It is sentimental to leave a place which you have made a sincere contribution to and leave people who you spent most of the time with. Several days ago, on an ordinary Friday, Michael Lynch just retired from West Kowloon Cultural District Authority.

I remember the day I saw Michael for the first time. It is on 1 Jun 2015, the first day of my internship. It is unanticipated that he came to welcome us, shaking hands and taking photos with us. From his talking and behaviours, I knew he was a kind and humorous person. After that day, I also met him in the elevator several times and every time he greeted me warmly. It is hard not to appreciate his common touch.

The authority prepared a farewell party for him with all staff attended. The most impressive part for me is the video showing. Everyone showed their blessing and shared their feeling in the video, inspiring and touching. Someone even cannot help crying. Being one of numerous ‘actors’ in the video, I knew the video was prepared for a long time and maybe longer than I thought. Even many stories of them behind are not known by me, I can tell their appreciation about Michael. Another thing I am going to tell is his photo card. Everyone can receive a card with the photo of Michael. We requested him to sign on that. Although it took much time to sign his name on every card, he managed to make everyone satisfied.