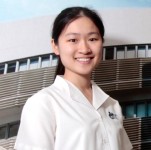 ‘Unframed’, the theme of the M+ summer camp was as exciting and groundbreaking as the content and design (e.g. workshops, mentoring group sessions) of the camp as it embraces and acknowledges each participant’s area of interest; which thus truly made the entire experience of the camp to be even more personalised and rewarding. An example is that, unlike other summer camps (generally speaking), this camp offered us the freedom to choose the combination of workshops that we’d like to attend according to our own interests. One of the workshops I’ve attended was ‘Believe in Skepticism; Be Skeptical about Beliefs’ (相信懷疑；懷疑相信) by Tang Kwok-hin (鄧國騫)－it consists of a set of blindfolded games, in which we were given an identity (for example: a 60-year-old employee of ATV). Under 3 different scenarios, based on the information and our own imaginations of the characters that we were to become, we had had conversations with other participants who were blindfolded as well. Although it might seem to be merely a role-playing game, it in fact challenged our ‘accustomed’ way of knowing, and indeed inspired us to think critically and imaginatively. It is really rare that secondary school students can get to be in touch with such influential people in the Hong Kong art scene, and we were absolutely delighted to have mentoring group session everyday in the camp. My mentor was an architect, Wyan Yeung Li-shung (楊理崇). Through different fun activities such as the spontaneous design challenge (inspired by objects we collected from the camp site), he has brought us new perspectives on how we think and create. Not only did the frequent mentoring group sessions bring us closer to our mentor, but also allow us to share our thoughts and doubts that have come to our minds after attending workshops in a very casual way.

What the Water Gave Me, dedicated to those I met in Venice