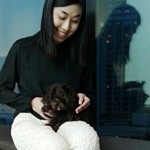 Me merging seamlessly into the churning river

This is actually my favourite room of the installation, as it reminds me of a scene in Wuthering Height in which Catherine’s ghost appears at the window and begs to be let in.

A glorious display of a miscellaneous assortment of objects

Room with a view (not mine, unfortunately)

Entrance to the Arsenale is right opposite to our site. Arsenale is one of the two main exhibition venues of the Biennale (the other one is called Giardini).

Master Chef Jeff and his assistant are diligently dicing tomatoes and garlic.

While the flip side of the story is……a girl turned her risotto into a pot of watery rice porridge.

My bed broke in the middle of the night. No I didn’t take home an Italian guy, just in case you wonder.

Sunset time in Venice is around 2030 and we are usually home by then. It was not until yesterday that we managed to take a glimpse of San Marco Square looks during the night time.

I bet they can dry their laundry in a few hours’ time. But it takes at least 2 days for ours to dry since our apartment is rather damp and humid.

This could as well be an art installation, don’t you think so?

OK. The actual story is that garbage in Venice will have to be put into a bag with a string which you will then hang onto a hook so they could be collected afterwards. This is to prevent rats from chewing the garbage.

My lunch in a restaurant called Biennale near the site

Since dogs are not allowed inside the exhibition, sometimes interns will have to baby-sit them for a while.

The first room was initially an outdoor space, hence water drifts into the exhibition site when it rains.

Now we got ourselves a real river!!