West Kowloon Main Site
(May) We All Live in Interesting Times

“May You Live in Interesting Times,” the title of the 58th edition of the Venice Biennale, is said to be an ancient Chinese curse, though none of the Chinese here at the Biennale, at least those I have met, seem to have any inkling where this comes from. 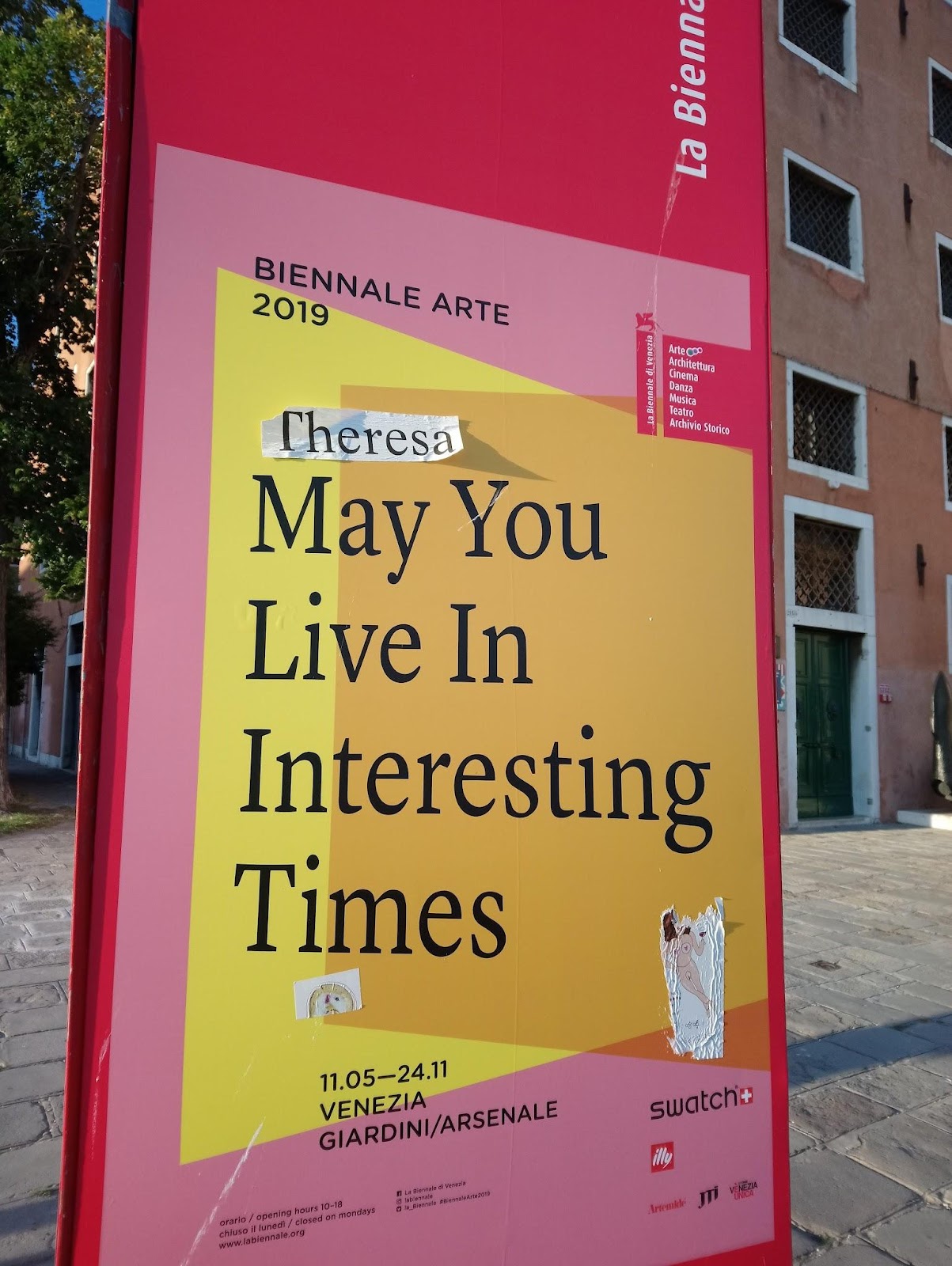 But it has been interesting from the start—the moment I set foot on Venetian soil (if soil that is), in the afternoon of 12th June, at the Arsenale vaporetto stop, I was immediately confronted with the Biennale sign post with “Theresa” scribbled on top of the Biennale title. The British Prime Minister had resigned as Conservative leader five days previously, leaving the complicated issue of Brexit with an even more uncertain future.

Not to mention on that very same day the Hong Kong exhibition was closed in response to the mass strike back home in Hong Kong against the controversial extradition bill. So the first day in Venice was a day of both rest and unrest for me. The weeks following, I have received a lot of kind words from visitors from all over the world who had seen the news about Hong Kong, some even left notes of solidarity on our guest book. One English old gentleman, with humour typical of his kind, remarked, “You live in interesting times indeed.” To that I replied with a smile, “We all do.” 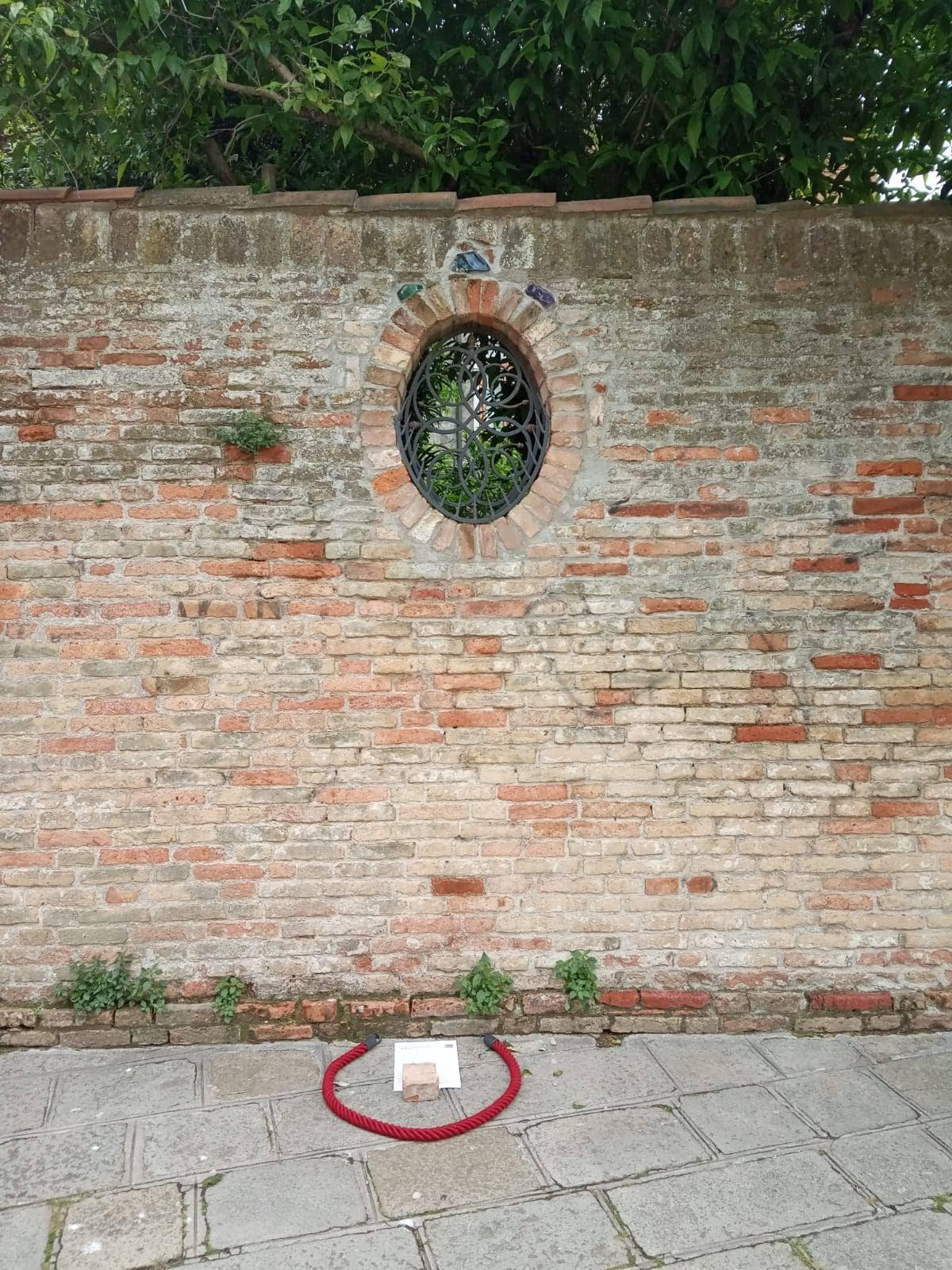 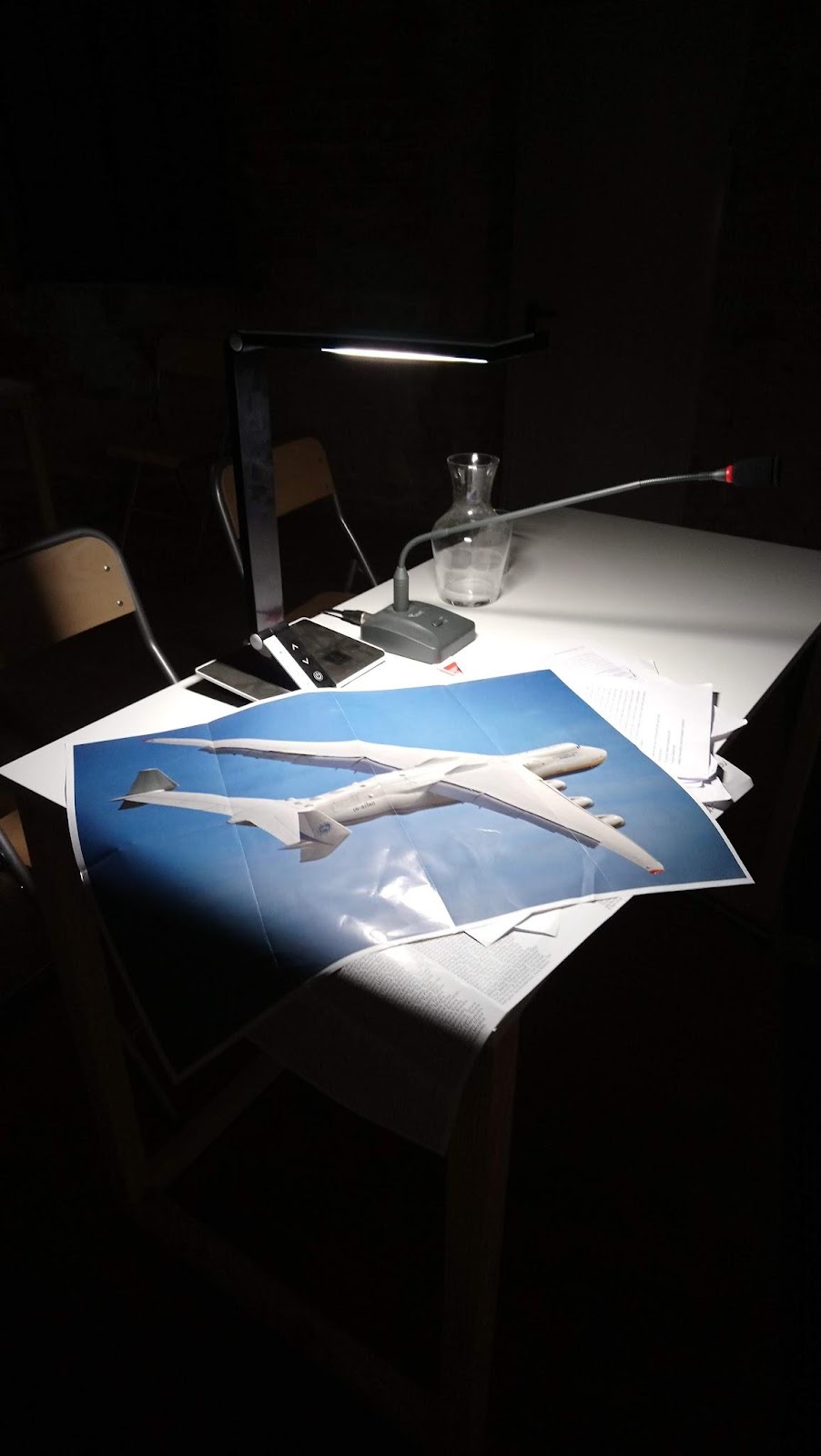 Much has been commented upon the precariousness of showing at the Venice Biennale (see this article by Melissa Gronlund), and after the noted absence of the Venezuelan Pavilion at the Biennale opening due to funding problems, I have yet learnt another story related to bureaucracy and disorganisation. The Ukrainian Pavilion has arranged an aircraft containing a list of “all Ukrainian artists” in a hard drive, to fly over the Giardini during the opening day, and cast a symbolic shadow over the Eurocentric world art history. After viewing the documentation videos of the aircraft and the Biennale opening day, I was informed by the pavilion staff, in a conspiratorial tone, that the aircraft never flew, for various reasons almost as enigmatic. “But the legend about the aircraft lives on, and people will continue to talk about it,” she said. 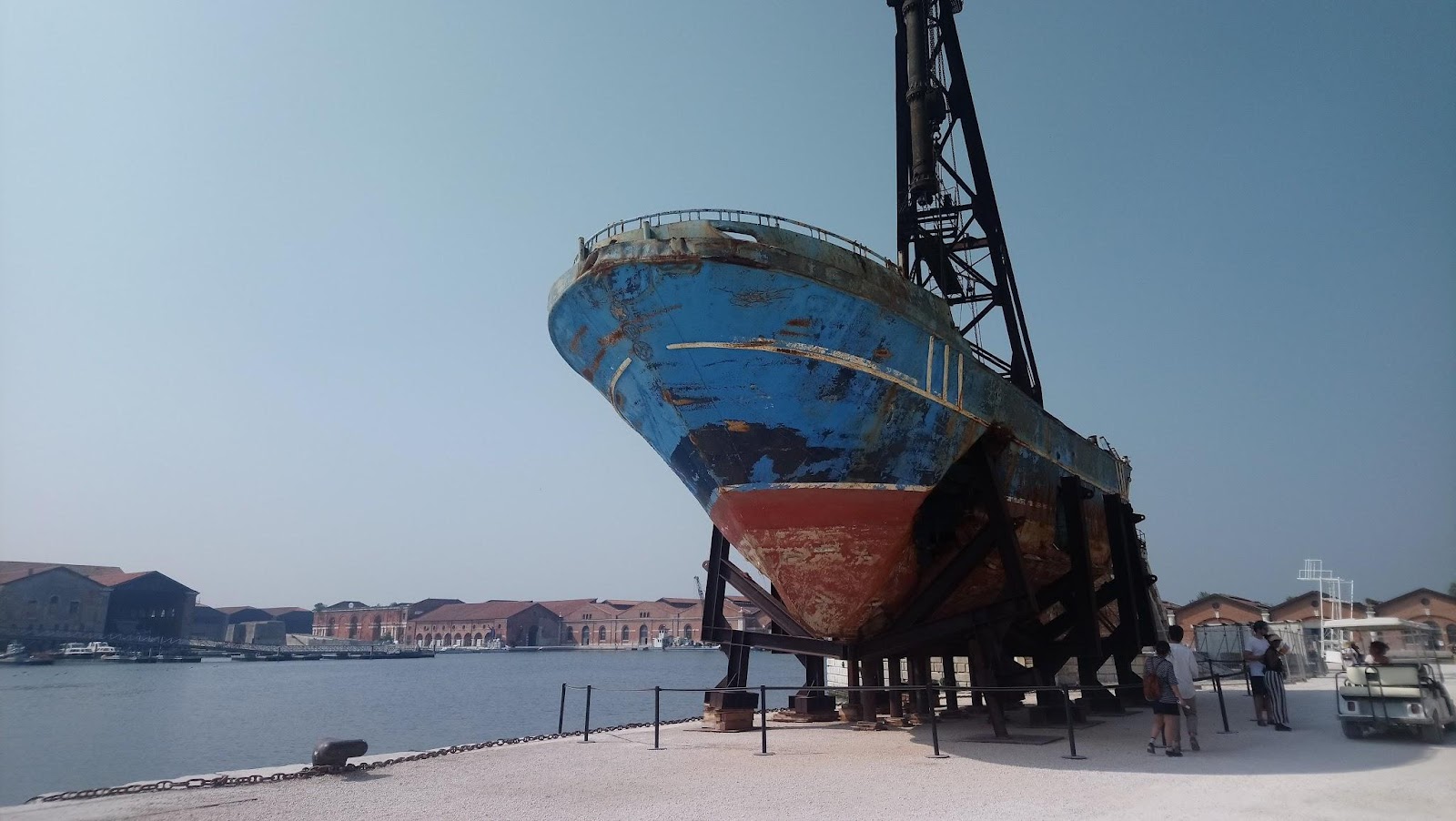 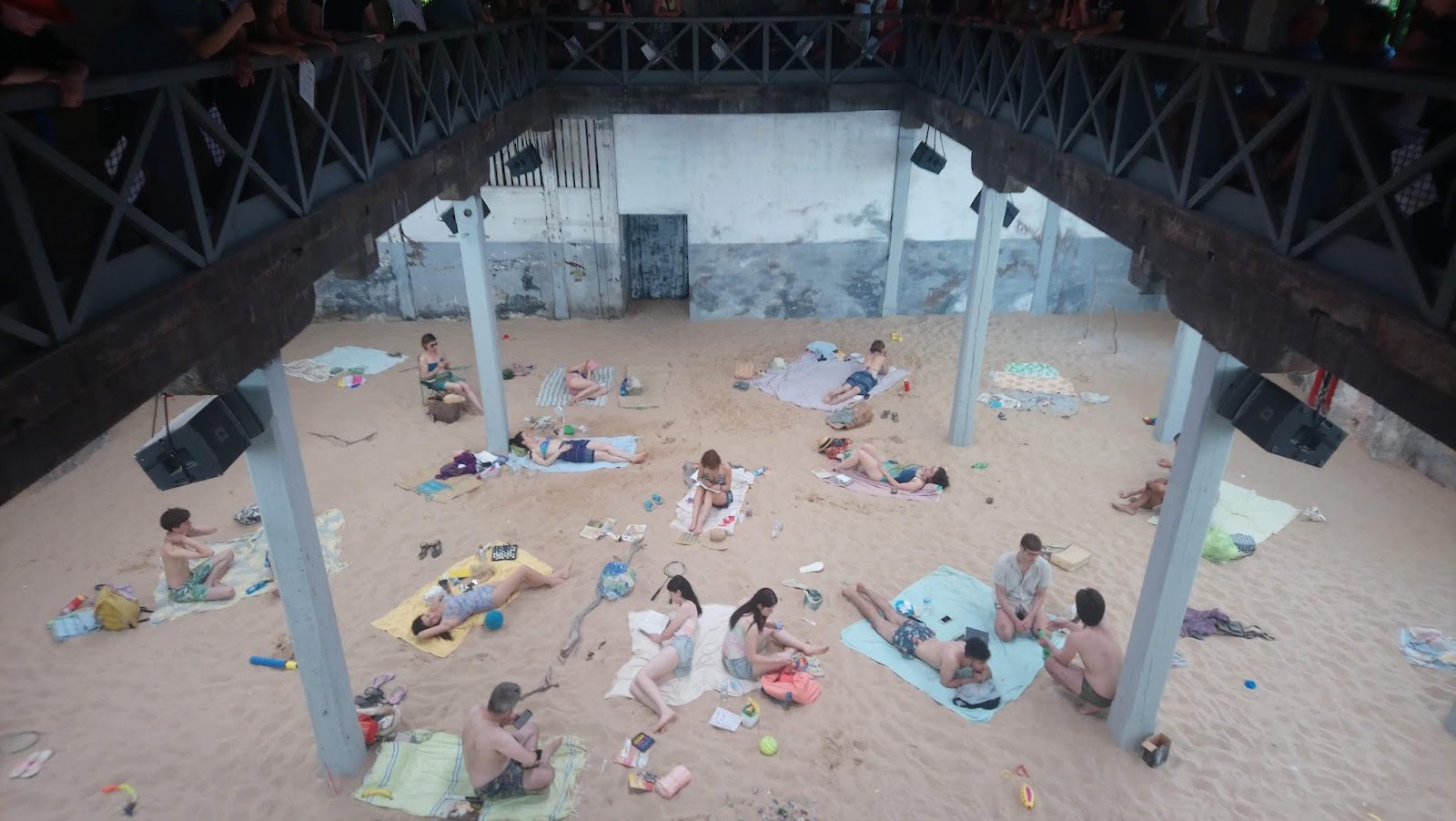 That brings to mind the controversial migrant shipwreck on display inside the Arsenale. While it certainly points to a very blatant fact of our interesting times, and possibly to the distaste of many who have only come for an artistic vacation away from the strife of life, not to mention debates about whether this counts as art, I am personally more impressed by the fact that the project pulled off despite all the apparent bureaucratic hurdles. On a brighter side lies the Lithuanian Pavilion, whose crowdfunded project involving an opera performance on an indoors artificial beach finds success after it won the Golden Lion at the Biennale, which guaranteed the continuation of the performance and even an extra performance day per week. If that does not solve all the world’s graver problems, it at least is a successful case of the (better) possibilities of sharing economy.

To end this contemplation on our “interesting times,” and to find consolation for the troubles at home and the world at large, I will just quote what Leung Man-tao wrote on our guest book during his brief but engaged visit to the Hong Kong exhibition: “In crucial time such as this, to find a connection with my city in this strange land, there is a road to the world again. （非常時刻，在異鄉遇到我城來的連繫，世界就有了路。）

Mary Lee, writer, translator, editor and art practitioner currently based in Hong Kong and Berlin. Former manager of alternative art space ‘Things that can happen' and former acquisitions coordinator at the Asia Art Archive library. Independent projects include photobook and exhibition ‘80±: post-80s in the eyes of post-80s’ (2010), artistic book and exhibition ‘BERTY’ (2013, collaboration with Angela Su), artist book ‘Dark Fluid: A Science Fiction Experiment by Angela Su’ (2017, collaboration with Angela Su et al). Art administration and translation work besides, in constant pursuit of a personal art/writing practice that responds to the world and society.